“So Joshua took the whole land, according to all that the LORD had spoken to Moses, and Joshua gave it for an inheritance to Israel according to their divisions by their tribes. Thus the land had rest from war.”
Joshua 11:23

“The land has rest from war in the sense that no more pitched battles were required.  But the completion of the campaign ‘took a long time’ (v. 18), and even at the end of Joshua’s life there remained ‘very much land to be possessed’ (13:1).  To deal with the parts of the country still unsubdued was now to be the responsibility of the individual tribes.”

Joshua 12 lists those kings conquered by Israel under the command of Moses, east of the Jordan River, and under the command of Joshua, west of the Jordan River.  Chapter 13 begins a record of the division of the land into the inheritances of the 11 tribes and the 2 half-tribes of Israel (the descendants of Joseph’s sons, Ephraim, the younger, and Manasseh, the firstborn, each received separate tribal inheritances). The twelve sons of Jacob, whose descendants were divided into tribes, were: Reuben, Simeon, Levi, Judah, Zebulun, Issachar, Dan, Gad, Asher, Naphtali, Joseph and Benjamin.

The inheritance division is not finished by the end of chapter 15, but I wanted to show you a map of their lands: 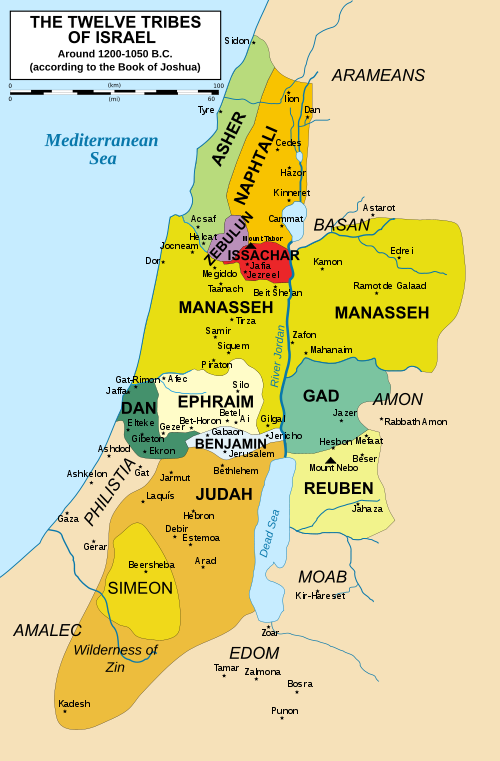 From the tribe of Levi come the priests for the nation of Israel, and this tribe is not allotted its own territory (cf. Deuteronomy 18:1–8). In Joshua 21, the Levites will be given cities scattered within the lands of the other tribes.

“To the tribe of Levi alone Moses gave no inheritance. The offerings by fire to the LORD God of Israel are their inheritance, as he said to him….

“But to the tribe of Levi Moses gave no inheritance; the LORD God of Israel is their inheritance, just as he said to them.”
Joshua 13:14, 32b (ESV)

Caleb’s individual inheritance is specifically mentioned in Joshua 14:6–15.  He and Joshua alone were the two spies of the total twelve sent by Moses to spy out Canaan who did not rebel against God, but trusted Him to deliver the land into their hand (cf. Numbers 13:1–14:38).  It is mentioned numerous times that Caleb followed the Lord fully (Numbers 14:34, 32:12; Deuteronomy 1:36; and Joshua 14:9; 14:14.  Caleb himself states:

“Nevertheless my brethren who went up with me made the heart of the people melt with fear; but I followed the LORD my God fully.”
Joshua 14:8

Caleb obtained his inheritance, but he left us a legacy of an example: he followed the Lord fully and, in the face of opposition, attempted to persuade others to do the same.