“Samuel said, “Has the LORD as much delight in burnt offerings and sacrifices,
As in obeying the voice of the LORD?
Behold, to obey is better than sacrifice,
And to heed than the fat of rams.
For rebellion is as the sin of divination,
And insubordination is as iniquity and idolatry
Because you have rejected the word of the LORD,
He has also rejected you from being king.”
1 Samuel 15:22–23

In Tuesday’s Bible reading is 1 Samuel 11–15, Saul becomes king in chapter 11 after he leads Israel to defeat the Ammonites. In chapter 12, Samuel tells Israel once more of their wickedness in rejecting God and asking for a king to rule them. The people finally repent and Samuel warns them repeatedly to follow the Lord and to serve Him with all their heart. 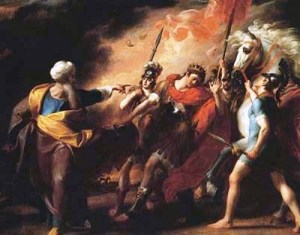 Saul continues to lead Israel to victory in war in the next chapters, but his rebellious, headstrong and foolish actions bring rebuke from Samuel and the news that God will remove the kingdom from his house. In chapter 13, impatient in waiting for Samuel to come, Saul presumes to take upon himself the role of priest and offer sacrifice. When Samuel arrives he tells Saul he has acted foolishly and his kingdom will not endure.

Chapter 14 has the record of Saul’s son, Jonathan, and his armor bearer who bravely take a Philistine garrison by themselves. Jonathan’s courage and trust in God are seen in this chapter, contrasting with his father’s foolish style of leadership when Saul curses anyone who eats before evening and before Saul has avenged himself. Jonathan unknowingly eats honey and has a few words of commentary about the detrimental effect of not eating on the men. When it’s discovered that Jonathan had eaten, Saul is ready to put his own son to death and is only stopped by the refusal of the people to let this happen.

Finally, in chapter 15, Saul’s rebels against the direct command of God in fighting the Amalekites and lies about it to Samuel. Samuel delivers God’s words of judgment against Saul.

As I was reading I thought of several things. Jonathan is under no illusions about his father and is a better man.

The other thing is that Samuel words that I quoted at the top are very sobering. Have you ever thought that rebellion is as the sin of divination? Or that insubordination is as iniquity and idolatry? Saul had a casual attitude towards obeying God, and he did as he wanted at the moment, even attempting to cover up his sin. His disobedience was taken seriously by God and came with severe consequences.

Saul’s example is one of those examples of warning. May God enable us to learn and may He enable us to live in obediently in awe and reverence before Him.