Then Moses said to Aaron,
“It is what the LORD spoke, saying,
‘By those who come near Me I will be treated as holy,
And before all the people I will be honored.’”
So Aaron, therefore, kept silent.
Leviticus 10:3 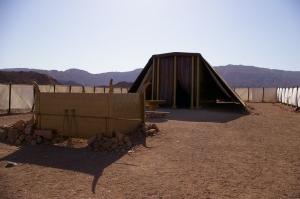 Monday’s Bible reading is Leviticus 10–12. Chapter 10 is about the sin of Aaron’s son Nadab and Abihu. Chapters 11 and 12 shift topics: chapter 11 is on animals that may be eaten for food and chapter 12 concerns the laws for motherhood.

Oswald Allis has this commentary on the sin of Nadab and Abihu in chapter 10:

“Note the words, Now Nadab and Abihu…took. Nothing has been said in chs. 8 and 9 about the offering of incense. They are represented as acting entirely on their own initiative and not at the command of Moses. Offered unholy fire (cf. Ex. 30:9); apparently fire not taken from the bronze altar. Both of them did it. The offering of incense on the golden altar was the duty of the high priest (Ex. 30:9) or of one of the priests (Lk. 1:9). For them to take precedence over their father in the first performance of this solemn function was an act of presumption. For the two of them to undertake it at the same time suggests rivalry and jealousy. Their act may also have been presumptuous because the time for offering incense (morning or evening) had not arrived. These and still other elements may have entered into this act of sacrilege. The occasion was so solemn and the ritual had been performed with such care, everything being done ‘as the Lord commanded’, that such impulsive and arbitrary departure from it as Nadab and Abihu were guilty of must have been highly presumptuous and sacrilegious.”1

Last week, in Leviticus 7–9: The Priests & The Offerings, I gave two of at least five principles Gleason Archer states are found in Leviticus. As the book moves into the laws regarding things that are clean and unclean as well as other topics, here are the last three:

“3. As a holy people spiritually wedded to Jehovah, Israel must rigorously abstain from all sexual unchastity, all violation of the marriage bond. They must refrain from contact with corruption and decay (such as corpses or defiling disease). These provisions are to be understood as giving expression to a fundamental attitude of love toward God and man. The second great commandment as defined by the Lord Jesus (Mt. 22:39) was derived from Leviticus 19:18: “Thou shalt love they neighbor as thyself.” The basic principle underlying monogamy is contained in Leviticus 18:18, [John Murray, Principles of Conduct] for the term sister in that verse may also imply “another woman.”

4. Nothing corrupt or liable to speedy decay may be presented as an offering to God. This excludes leaven, milk (which quickly sours), honey (which ferments), swine (associated by the heathen with the gods of the netherworld), clothing made of a mixture of differing materials (such as wool and flax), which typified a commingling of the holy and the profane.

5. The religious year is dominated by the sacred number seven (symbolizing the perfect work of God)….”2

There is more background on the significance of Leviticus in Leviticus 1–3: Law & Sacrifice. I’ve gone into detail because I want you to see and understand its value in helping you to know God.