Today’s Bible reading is Job 37 and Job 38, however, because Elihu finishes speaking in Job 37, and God speaks in Job 38, I’m going to do the two chapters in separate posts.

Chapter 36 begins Elihu’s last speech which continues through the end of Job 37. If you haven’t read Job 36, read it as well, but before you begin reading, remember to ask God to teach you from His Word: to give you understanding of who He is and who you are, and to renew your mind as you read.

“Elihu’s last word falls into two parts so distinct in tone and content as to give the impression that they are independent compositions and could have been separate speeches. The first section (36:1–21) continues the themes of the preceding chapters. The second (36:22–37:24) introduces a new line of argument. It begins to move in the direction of the Lord’s speeches that follow and so serves as a transition to the concluding cycle (chapters 38 – 42)…

“This concluding statement contains Elihu’s best and most distinctive ideas…The harsh tone of that Elihu had adopted in his second and third speeches is hear softened…While it [Job 36:1–21] does repeat some arguments that have already failed to carry the day, they are diffused by a deeper analysis and a more humane sensitivity that brings them nearer to Job’s condition.”1

Andersen points out, “The questions which begin to appear in verses 22 and 23 dominate the rest of the book.”2

“So far as the world is concerned, God’s wisdom is seen in its variegation and in its order. So far as man is concerned, God’s wisdom is expressed in his moral conduct. Somehow the book is moving towards a synthesis of these two by ascending to God as the common Creator of all, not by descending to the dull aphorism that the ‘good’ is what is ‘according to nature’.”3

Elihu is at his best in as he describes the majesty and power of God as seen in the wonders and intensity of weather.

“At this also my heart trembles,
And leaps from its place.
Listen closely to the thunder of His voice,
And the rumbling that goes out from His mouth.
Under the whole heaven He lets it loose,
And His lightning to the ends of the earth.
After it, a voice roars;
He thunders with His majestic voice,
And He does not restrain the lightnings when His voice is heard.” 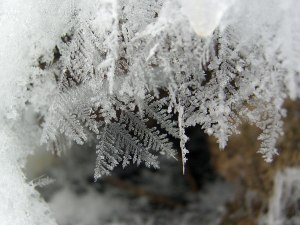 “For to the snow He says, ‘Fall on the earth,’
And to the downpour and the rain, ‘Be strong.’
He seals the hand of every man,
That all men may know His work.
Then the beast goes into its lair
And remains in its den.
Out of the south comes the storm,
And out of the north the cold.
From the breath of God ice is made,
And the expanse of the waters is frozen.”
Job 37:6–10
–
“Whether for correction, or for His world,
Or for lovingkindness, He causes it to happen.”
Job 37:13
–

“From the north comes golden splendor;
Around God is awesome majesty.
The Almighty—we cannot find Him;
He is exalted in power
And He will not violate justice and abundant righteousness.”
Job 37:22–23
–
“Therefore men fear Him;
Surely all wise of heart fear Him!”4
Job 37:24
–

Featured image: Lightnings sequence 2 animation-wcag.gif: Sebastien D’ARCO, animation by Koba-chan. (CC BY-SA 2.5)
Lightning at Head of Storm: Paulash35. (CC BY-SA 4.0).
Feathery Snow Crystals: Amada44. Source: Jason Hollinger. (CC BY 2.0).
Kaanapali beach sunset on Maui Hawaii: dronepicr. (CC BY 2.0).
1,2,3,4Francis Andersen, Job (Inter-Varsity Press, Downers Grove IL: 1976) 277–278, 282, 282, 288 This is Andersen’s translation of Job 37:24. He writes, “It resembles other verses which conclude speeches in this book by having a succinct bicolon with parallelism. But translators have missed it. NEB has silently removed the troublesome negative (not of RSV), but loses the parallelism by translating the same word [as] ‘reverence’ in verse 24a, but [as] ‘look’ in verse 24b.”