“Manasseh was twelve years old when he became king, and he reigned fifty-five years in Jerusalem; and his mother’s name was Hephzibah. He did evil in the sight of the LORD, according to the abominations of the nations whom the LORD dispossessed before the sons of Israel.”
2 Kings 21:3–9

Tuesday’s Bible reading is 2 Kings 21–25. These last chapters in 2 Kings open with the reign of Manasseh, and end with the destruction of Jerusalem and the deportation of all but the very poorest to Babylon.

Manasseh was the son of Hezekiah, but he was completely unlike his father. William LaSor writes:

“Manasseh ruled longer than any other king in Judah, coming to the throne as a co-regent in 696, becoming sole ruler in 687/6, and ruling until 642. He is described as the worst of all the kings, and the sins of Manasseh are given as the reason for the judgment on Judah (24:3)….

“Manasseh is the only king of Judah likened to Ahab of Israel.”1

Among other things he build altars to idols within the temple and practiced child sacrifice and the occult. As I read through the history of these kings, it’s striking to see no consistency in a good king being followed by a good son especially in this case. Did his age at his father’s death mean he met with undue influence by those who had no fear of God? Whatever the reason, it’s clear that the people followed the king.

His son, Amon, became king at the age of twenty-two and was then killed two years later by servants. Those servants were executed by the people and Amon’s son, Josiah, became king. Josiah led Judah to a great revival and turning back to God. In fact, LaSor comments:

“Josiah is an ideal king in many ways, and in the book of Kings, he and his great-grandfather Hezekiah are the only kings receiving unqualified approval.”2

How did this revival begin?

“When the king heard the words of the book of the law, he tore his clothes. Then the king commanded Hilkiah the priest, Ahikam the son of Shaphan, Achbor the son of Micaiah, Shaphan the scribe, and Asaiah the king’s servant saying, “Go, inquire of the LORD for me and the people and all Judah concerning the words of this book that has been found, for great is the wrath of the LORD that burns against us, because our fathers have not listened to the words of this book, to do according to all that is written concerning us.””
2 Kings 22:8–13

The Word of God pierces Josiah’s heart and brings repentance, and he is spared by God from seeing the judgment that will fall upon Judah.

“The king stood by the pillar and made a covenant before the LORD, to walk after the LORD, and to keep His commandments and His testimonies and His statutes with all his heart and all his soul, to carry out the words of this covenant that were written in this book. And all the people entered into the covenant.”
2 Kings 23:1–3

Josiah demolishes the idols and altars built by his grandfather and cleanses the land. He could have received no higher praise than this:

The grandson of the most wicked king of Judah is the one who turned completely to the Lord. If Josiah could turn to God, then whatever your family heritage may be, then you can. He repented and turned with all his heart and with all his soul and with all his might; and so can you.

The rest of the book is a record of Josiah’s sons and grandson who lose the kingdom of Judah to Nebuchadnezzar, king of Babylon. 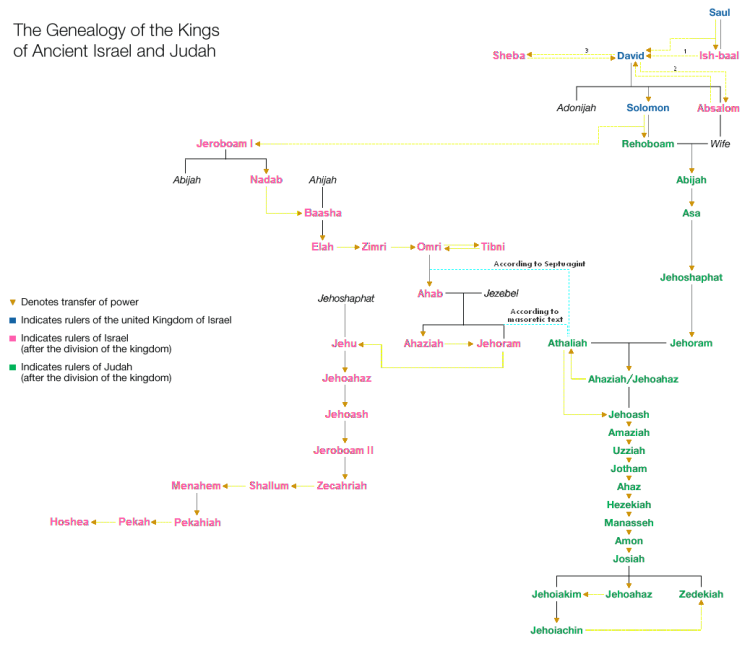