I’m thankful for many things—my husband, my children and for various family and friends who are part of my life. I am grateful for strangers I have met who have encouraged me. 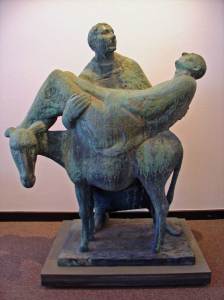 Over the past three years my family has been through difficult times, as you may have guessed from some of my writings. We’ve been in a state of shock, and we’ve grieved through severe loss. We’ve had a few people, such a very few, who have stayed with us and cared for us. But those who have been there have been guide- posts of hope to us as we’ve stumbled in a dark night. I’m grateful for them, and I couldn’t have lived through this time without them.

In suffering we always want to sort things out and blame someone, and, as Job found out, many times others want to blame you for your suffering. While we may bear responsibility in some instances, there are many times the plain truth is that it is extraordinarily difficult to accept the reality of living in a fallen world and acknowledge that sometimes God allows suffering to occur for no discernible reason. It’s hard enough to learn to walk in trust with God when living through such times, but affliction is exacerbated, again, as Job found out, when your counselors refuse to accept God’s sovereignty and goodness in the face of pain that has no known reason.

At such times what is needed is not answers—there are none, and answers can also be attempts to put you or God in a labeled box—what it is needed is companionship. This may sound simple to give, but it is amazing how few will be a friend.

Two are better than one because they have a good return for their labor. For if either of them falls, the one will lift up his companion. But woe to the one who falls when there is not another to lift him up.
Ecclesiastes 4:9-10

My husband and I have talked about this, and one thing we have conjectured is that people are frightened by suffering. Suffering when there is due cause is easy for others on the outside to handle, because then they merely have to avoid taking the actions that led to the problems they see. But to see suffering without due cause, when the only choice is to accept the sovereignty of God, well, that is frightening, because there can be no avoidance to deflect that kind of suffering, only acceptance that God is God.

Sometimes I have felt as if I have a communicable disease, and no one wants to get close for fear they will catch it. It is one thing to hear or read about suffering when a person is through the valley and out on the other side—we find encouragement in the writings of someone like Corrie ten Boom—it is entirely different, however, to voluntarily enter the valley of another and walk beside someone. You must be willing to face your own fears and doubts about your reaction to God if He were to allow similar circumstances to occur in your life. To be willing to do that for another is love indeed.

Os Guinness’ words have been of immense help to me:

…If we do not know why we trust God, then we will always need to know exactly what God is doing in order to trust him…

If, on the other hand, we do know why we trust God, we will be able to trust him in situations where we do not understand what he is doing….

At root there are only two basic questions for faith—Is God there? And is God good?

…Face to face with mystery, and especially the mystery of evil, the faith that understands why it has come to trust must trust where it has not come to understand….

Can faith bear the pain and trust God, suspending judgement and resting in the knowledge that God is there, God is good, and God knows best? Or will the pain be so great that only meaning will make it endurable so that reason must be pressed further and further and judgements must be made?…To suffer is one thing, to suffer without meaning is another, but to suffer and choose not to press for any meaning is different again.

I have found that those who help are those who have suffered. It is not enough, however, to have been there, done that—those who extend compassion are those who have also, in the words of James, “…let endurance have its perfect result…” They have come through suffering without bitterness or denial or avoidance of its reality. They know how hard it is. They have learned to trust God. They shared in His comfort. And now they hold others up and comfort them.

Blessed be the God and Father of our Lord Jesus Christ, the Father of mercies and God of all comfort, who comforts us in all our affliction so that we will be able to comfort those who are in any affliction with the comfort with which we ourselves are comforted by God. For just as the sufferings of Christ are ours in abundance, so also our comfort is abundant through Christ. But if we are afflicted, it is for your comfort and salvation; or if we are comforted, it is for your comfort, which is effective in the patient enduring of the same sufferings which we also suffer; and our hope for you is firmly grounded, knowing that as you are sharers of our sufferings, so also you are sharers of our comfort.
2 Corinthians 1:3-7

I’ve thought about the parable of the Good Samaritan, and I’ve wondered if Jesus chose the Samaritan to show compassion not only to underscore the hardheartedness of the religious leaders, but also because a Samaritan would have known what it was to suffer and to need compassion. I’m also fascinated that of the ten lepers healed by Jesus, the only one who came back and thanked Him was a Samaritan.

One of the greatest differences I see between today and the time in which I became a Christian is that the number of people willing to walk with others in affliction is greatly diminished. This is one of the greatest fault lines in the Christian church today. I’m not sure of all the reasons, but I think it always comes back to gratitude for God’s grace and forgiveness. A ‘first love’ for God reverberates in love for each other.

In Pilgrim’s Progress, Christian and Hopeful are imprisoned and beaten by Giant Despair, until Christian remembers he holds the key, Promise, that will open any lock in Doubting Castle. As they leave,

Then Christian pulled it out of his bosom, and began to try at the dungeon-door, whose bolt, as he turned the key, gave back, and the door flew open with ease, and Christian and Hopeful both came out. Then he went to the outward door that leads into the castle-yard, and with his key opened that door also. After he went to the iron gate, for that must be opened too; but that lock went desperately hard, yet the key did open it.

Now, when they were gone over the stile, they began to contrive with themselves what they should do at that stile, to prevent those that shall come after from falling into the hands of Giant Despair. So they consented to erect there a pillar, and to engrave upon the side thereof this sentence: “Over this stile is the way to Doubting Castle, which is kept by Giant Despair, who despiseth the King of the Celestial country, and seeks to destroy his holy pilgrims.” Many, therefore, that followed after, read what was written, and escaped the danger.

There are times we drop the key or we cannot find it for the tears. We then need loving friends to pick it up, place it in our hands and help us open that iron gate whose lock is so “desperately hard.”

For the despairing man there should be kindness from his friend;
Lest he forsake the fear of the Almighty.
Job 6:14

I thank God for those friends.

__________
Barmhartige Samaritaan by Han Wezelaar (The Good Samaritan): Gouwenaar, Public Domain.
Os Guinness, Doubt (Lion Publishing plc, England: 1976, Third ed. 1987) 199, 200, 201, 202, 206.
John Bunyan, Pilgrim’s Progress, The Seventh Stage. I was reminded of this section because Os Guinness quotes from it in Doubt.
Doubt was revised and republished twenty years later as God in the Dark. I own both books. I haven’t yet read the second, and I don’t know if all the original ideas were incorporated into it, but the first book is longer and six chapters have been omitted in the later publication, including four under the section titled, “Resolving Doubt.” I once found a stack of Doubt in a bookstore for about 5o¢ each. I bought at least a half-dozen, gave some away and kept two. One I loan out, and one I keep! I did this because I think I am now using my third copy of Francis Schaeffer’s True Spirituality! Some books you want to loan, but you never want to lose!