The division of the land of Canaan by the twelve tribes of Israel that began in Joshua 13, continues in today’s Bible reading of Joshua 16–20.  This reading comes the day after the reading in Genesis 12–15, in which God promised this land to Abraham’s descendants.  After their sojourn in Egypt, his descendants are here.

Below are the references for the lands of the tribes.  At the end of chapter 17, Joshua exhorts Ephraim and Manasseh to finish taking their land; at the beginning of chapter 18, he must exhort the remaining seven tribes to take theirs.

Caleb and Joshua are also listed in the inheritances. Of the twelve sent by Moses to spy out Canaan, they were the only two who did not rebel against God, but trusted Him to deliver the land into their hand (cf. Numbers 13:1–14:38).  Remember because the priests for the nation of Israel come from the tribe of Levi, this tribe is not allotted its own territory (cf. Deuteronomy 18:1–8). In Joshua 21, the Levites will be given cities scattered within the lands of the other tribes. 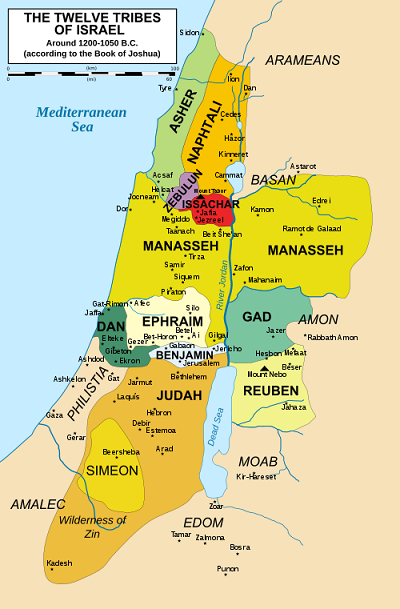 West of the Jordan:

In chapter 20, six cities of refuge are designated for those who unintentionally kill someone. Anyone guilty of manslaughter could flee to one of these cities and take refuge there from any avenger of blood and have his case heard by the elders of that city. There were three on each side of the Jordan River. If you look at the tribal locations on the map, you can see they were scattered over the land to give someone a chance to be able to flee to one in time to prevent their life being taken before the case was heard.  This allocation gives evidence of the compassion and wisdom of God.

This is why Israel is called The Promised Land.  In these chapters Abraham’s descendants move into the land promised to them by God.