“By smooth words he will turn to godlessness those who act wickedly toward the covenant, but the people who know their God will display strength and take action.”
Daniel 11:32

Friday’s Bible reading is Daniel 7–12. The chapters in the second half of Daniel are largely concerned with Daniel’s visions—and in some cases their interpretations—during the reign of Belshazzar and Darius. The first six chapters of Daniel for the most part record events during Daniel’s life and the visions are those of Nebuchadnezzar. Daniel is one of the most important prophetic books of the Bible because of its scope of history. John Walvoord writes:

“Among the great prophetic books of Scripture, none provides a more comprehensive and chronological prophetic view of the broad movement of history than the book of Daniel….Although other prophets like Jeremiah had much to say to the nations and Israel, Daniel brings together and interrelates these great themes of prophecy as does no other portion of Scripture.”1

“The only work which may justly be compared with it is the NT book of Revelation.”2 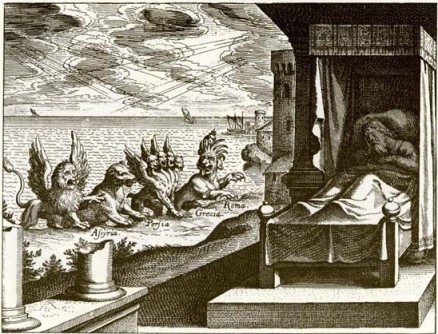 Because the daily Bible readings divide the book into only two days, it’s beyond the scope of these posts to summarize Daniel and fairly compare the various views and interpretations of the book. Instead I first want to give you a broad overview of Daniel’s prophecies from Rodney Stortz. I’ve inserted chapters to give you an idea of his overview of them:

“If the reader will keep these three main characters in mind—Antiochus, Messiah, and Antichrist—the prophecies of Daniel will be much easier to understand.”3

Now admittedly that is a very broad overview, but it’s important to keep the big picture in front of us.

The other thing I want to give you is a wise quote from Robertson McQuilkin regarding the study of prophecy:

“…All of our rigorous Bible study must be for the purpose of making the application to life, transferring the truth into day-by-day living.

“For example, take the Bible doctrine of prophecy. The Bible tells us why prophecy was given—clearly not for the use commonly made of it. “I am telling you before it comes to pass, so that when it comes to pass, you may believe that I am He” (John 13:19); italics added). “And now I have told you before it comes to pass, that when it comes to pass, you may believe” (John 14:29). That is clearly the purpose of prediction after it has been fulfilled. But what about the great mass of unfulfilled prophecy—does it have any purpose for today? Prophecy is primarily forth-telling God’s message, not fortelling [sic] the future. Of 164 predictive passages in the New Testament (excluding the book of Revelation, which is devoted exclusively to the subject), 141 are directly related to conduct, and apparently given to affect conduct—not to increase knowledge. Only 23 passages seem to be given primarily for information concerning the future.

I chose to start the post with Daniel 11:32 because it clearly states the direct connection between knowing God and our conduct.