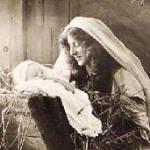 The lyrics of Thou Who Wast Rich Beyond All Splendour were written in China by Frank Houghton, an Englishman. The words, the music and the story behind the writing of this hymn make this song one of my favorite Christmas carols.

…This hymn was written at a particularly difficult time in the history of the missions to China. Missionaries had been captured by the communist Red Army and released in poor health after over a year of suffering. Others had been captured never to be heard from again. In 1934 the young missionaries John and Betty Stam (my great aunt and uncle) were captured in Anhwei and beheaded.

The news of these sorrows had reached the mission’s headquarters in Shanghai. Though this was a very dangerous time for both the Chinese Christians and the foreign missionaries, Frank Houghton [Editorial Secretary for the China Inland Mission] decided he needed to begin a tour through the country to visit various missionary outposts. While traveling over the mountains of Szechwan, the powerful and comforting words of 2 Corinthians 8:9, “though He was rich, yet for your sake He became poor,” were transformed into this beautiful Christmas hymn….

Frank Houghton was consecrated as Bishop of East Szechwan in 1937. For the difficult years of 1940 to 1951 he served as General Director of the China Inland Mission, a time when most missionaries were either interred or evacuated. Although some would return after War II, by 1953 there were no more foreign missionaries in China. What Hudson Taylor had begun almost 100 years earlier would be left to the Chinese Christians to continue….1
Chip Stam

__________
Nativity scene, cropped from 1905 photograph: This work is in the public in the United States because it was published (or registered with the U.S. Copyright Office) before January 1, 1923.
Brief biography: Frank Houghton.
1The Worship Quote of the Week (WQOTW), a worship ministry of Carl “Chip” Stam.
Chip Stam was Director of the Institute for Christian Worship at The Southern Baptist Theological Seminary in Louisville, Kentucky. He died of cancer this past May. You can learn more about him and his family heritage at In Memory of Carl ‘Chip’ Stam (March 10, 1953 to May 1, 2011) and at http://www.carlstam.org/

“Thou Who Wast Rich Beyond All Splendour,” Don Reece, soloist.