Why such an emphasis on eyewitnesses? Because Christianity is Jesus Christ. Christianity is not a mere system of ethics, mysticism, or philosophy, but rather it proclaims that Jesus Christ is the real God-Man, who was born, lived on this earth, died on a cross, and rose again, in—to use Francis Schaeffer’s phrase—historic space-time. Without the actual, real events of His life, His death, and His resurrection, we would be lost; we would be without hope.

My family will tell you how much I love maps. I found a fascinating Google map (of course!) and a timeline of the events of Holy Week. These pictures of space and time drive home the reality—that yes, Jesus Christ lived, died, and rose again, and here is where and when it happened. And that’s exciting!

You might also be interested in looking at April 3, AD 33: Why We Believe We Can Know the Exact Date Jesus Died by Andreas Köstenberger and Justin Taylor. 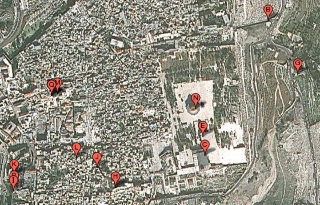 In his 2011 post Taylor also linked to a Google map of Jerusalem done by Crossway “pinpointing (to the best of our knowledge) the location of the major events of Holy Week with chronology.” That’s now a dead link, but clicking on the image will take you to a map of Passion Week in Google Earth at openbible.info.

While I was writing on Luke’s account of Jesus entering Jerusalem, I looked at a couple of harmony of the Gospels I own to see how they coordinated the events of Holy Week. One was done by A. T. Robertson in 1922 using the KJV, and the other was done by Robert L. Thomas and Stanley Gundry in 1978 using the New American Standard Version.* If you don’t have access to a harmony of the Gospels, in 2010 Justin Taylor harmonized the events of Holy Week in blog posts, summarizing the day and giving the Bible passages. Here are links to his work:

Holy Week: What Happened on Sunday?

Holy Week: What Happened on Monday?

Holy Week: What Happened on Tuesday?

Holy Week: What Happened on Wednesday?

Holy Week: What Happened on Thursday?

Holy Week: What Happened on Friday?

Holy Week: What Happened on Sunday?

“Thus it is written, that the Christ would suffer and rise again from the dead the third day, and that repentance for forgiveness of sins would be proclaimed in His name to all the nations, beginning from Jerusalem. You are witnesses of these things. And behold, I am sending forth the promise of My Father upon you; but you are to stay in the city until you are clothed with power from on high.”
Luke 24:45–49

“Possibly this episode occurred later, two days before Passover as Matthew and Mark may imply…instead of six days before as John places it. The placement of John is preferred in this Harmony, however, because it is easier to construe the synoptic accounts as flashbacks than to interpret John’s account as an anticipation. The fourth gospel apparently gives the event in its chronological sequence. Matthew and Mark, on the other hand, introduce it out of sequence either to contrast the worship of Mary with the animosity of the high priest, chief priests, and scribes…or to show why Judas was so interested in obtaining additional funds….”
–