I first heard of Coventry Carol in a novel by Helen MacInnes when she used it at a critical moment in her story. It’s a song that’s probably unfamiliar to many Americans. I know I’ve never heard it sung in church or in concert here in the United States.

The carol is both lullaby and lament, sung by the women of Bethlehem to their children who’ve been slain by the decree of an enraged Herod. It was written in the sixteenth century for The Pageant of the Shearmen and Tailors held in Coventry. The pageant told the story of the birth of Jesus, beginning with the Annunciation and ending with the killing of the little baby boys of Bethlehem.1

Now when they [the magi] had gone, behold, an angel of the Lord appeared to Joseph in a dream and said, “Get up! Take the Child and His mother and flee to Egypt, and remain there until I tell you; for Herod is going to search for the Child to destroy Him.”

So Joseph got up and took the Child and His mother while it was still night, and left for Egypt. He remained there until the death of Herod. This was to fulfill what had been spoken by the Lord through the prophet:

“Out of Egypt I called my Son.” 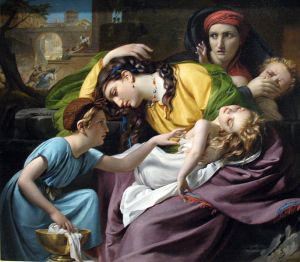 Then when Herod saw that he had been tricked by the magi, he became very enraged, and sent and slew all the male children who were in Bethlehem and all its vicinity, from two years old and under, according to the time which he had determined from the magi.

Then what had been spoken through Jeremiah the prophet was fulfilled:

“A voice was heard in Ramah,
Weeping and great mourning,
Rachel weeping for her children;
And she refused to be comforted,
Because they were no more.”
Matthew 2:13-18

This is a lovely and poignant rendition of Coventry Carol by Valeria Mignaco and Alfonso Marin.

O sisters, too, how may we do,
For to preserve this day;
This poor Youngling for whom we sing,
By, by, lully, lullay.

Herod the King, in his raging,
Charged he hath this day;
His men of might, in his own sight,
All children young, to slay.

Then woe is me, poor Child, for Thee,
And ever mourn and say;
For Thy parting, nor say nor sing,
By, by, lully, lullay.

“…Those little babies, they didn’t know it but those precious little babies in Bethlehem at that time were the first casualties in the warfare waged between the kingdoms of this world and the kingdoms of His Christ, they were the first casualties. But ultimately the victory would be won, the babies surely, if I read my Bible right, the minute they died went instantly into the presence of God, who gathers the little ones in His arms and says, “Forbid them not, for of such is the kingdom.” And the mothers, they could stop weeping because this very One who was now exiled in Egypt would come back to offer them a salvation that could unite them with their own babies….

“Matthew paints a masterpiece of a picture. Micah, he said the King would come to Bethlehem, and to Bethlehem He came. Hosea, the King would come through Egypt, through Egypt He came. Jeremiah, there would be weeping like Rachel in Ramah of old in the picture of Jeremiah, and there was as the mothers wept over the babies, beside the tomb of Rachel in the Ramah of Bethlehem. And the prophets of old said His name would be Nazarene, and He would be from Nazareth, and so it was. And at each point, He fulfills a prophecy that solidifies His right to reign. And so says Matthew, this is the King, by genealogy, by birth, by worship, by the jealousy of hatred, and by the fulfillment of prophecy this man was born a King, for this cause came He into the world.”2

_________
In the Anglican ecclesiastical calendar December 28th is The Innocents’ Day on which the little ones slaughtered in Bethlehem are remembered.
Das Massaker der Unschuldigen by François-Joseph Navez
1Coventry Carol:  The Hymns and Carols of Christmas.
Video by Lutevoice: Valeria Mignaco & Alfonso Marin, soprano-lute duo.
2John MacArthur, “The King Fulfills Prophecy, Part 2.” http://www.gty.org
This article originally appeared here at Grace to You