As Jesus talked with His disciples the night before He died on the cross (John 13–16), He spoke to them about who He was, and he described about the suferring they would face as His disciples. He reassured them of His continuing presence and care in His sending of the Holy Spirit even as He told them what the world would do to them because they were His.

As He spoke with them about how they were to live with each other, He gave them two commands—only two—and each one is significant. He began by washing their feet, the work of a slave.

“So when He had washed their feet, and taken His garments and reclined at the table again, He said to them, “Do you know what I have done to you? You call Me Teacher and Lord; and you are right, for so I am. If I then, the Lord and the Teacher, washed your feet, you also ought to wash one another’s feet. For I gave you an example that you also should do as I did to you. Truly, truly, I say to you, a slave is not greater than his master, nor is one who is sent greater than the one who sent him. If you know these things, you are blessed if you do them.””
John 13:12–17

“A quick reading of John 13:1–13 (some prefer to think of John 13:1–20 as the basic unit) shows that the episode of the foot washing is turned in two directions. On the one hand, it is symbolic of spiritual cleansing (cf. especially vv. 8–10); on the other, it serves as a standard of humble service and therefore as a call to all of Jesus’ disciples to ‘wash one another’s feet’ (vv. 12-17).”1

Humble service is the first command, taught by example and then explained though His words. The second command He taught by His words, and the next day His disciples would see those words explained by His example.

Remember there were other times when they had heard Jesus speak of the greatest command to love God, and the second, to love their neighbor. As He talked with them that night, Jesus repeated His new command, setting the standard for their love for each other.

“This is My commandment, that you love one another, just as I have loved you. Greater love has no one than this, that one lay down his life for his friends. You are My friends if you do what I command you.”
John 15:12-14

That same evening He prayed:

“I do not ask on behalf of these alone, but for those also who believe in Me through their word; that they may all be one; even as You, Father, are in Me and I in You, that they also may be in Us, so that the world may believe that You sent Me.2 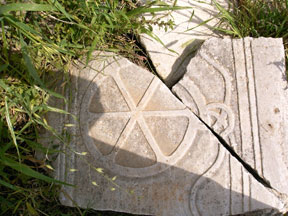 In “The Mark of a Christian” I tell the story of how a kind and loving Christian gave me the fish pendant above. I also write about the sad reality of those times when Christian love is as broken and cracked as the ἰχθύς wheel symbol on the left. You would think that the last two things Jesus commanded on the night before He died would be taken soberly and seriously by His disciples and obeyed. Alas, they are not.

We have lived in different cities and in very different regions, but everywhere we have too often seen church after church marred by a lack of service—remember that Jesus did the service of a slave—and a lack of love: unkindness, jealousy, arrogance, coldness, and apathy to the needs of others. Not just the people, but the leaders within the Christian church have had same ideas about being great and being first that the disciples had when they squabbled about prestige and power in the kingdom of God. Rather than take the Scripture seriously about how to live and care for one another, far too many in the church draw their template from the surrounding culture. The ironic thing is that some within the business community recognize the importance of authenticity, generosity and kindness, while Christians seem to have never heard of them, much less be on terms with the fruit of the Spirit. We should not be churches rife with favoritism who say ‘be warm, be filled’, but we are.

If the church is in any doubt as to what it means to love one another, Jesus gave us His example, and Paul in 1 Corinthians 13 described the attitudes and actions of love as he gave us characteristics we can see and recognize—characteristics that obviously flow from within from a changed mind and heart.

“Love never fails; but if there are gifts of prophecy, they will be done away; if there are tongues, they will cease; if there is knowledge, it will be done away. For we know in part and we prophesy in part; but when the perfect comes, the partial will be done away. When I was a child, I used to speak like a child, think like a child, reason like a child; when I became a man, I did away with childish things. For now we see in a mirror dimly, but then face to face; now I know in part, but then I will know fully just as I also have been fully known. But now faith, hope, love, abide these three; but the greatest of these is love.”
1 Corinthians 13

Maundy Thursday is named after the New Commandment:

“Most scholars agree that the English word Maundy in that name for the day is derived through Middle English, and Old French mandé, from the Latin mandatum, the first word of the phrase “Mandatum novum do vobis ut diligatis invicem sicut dilexi vos” (“A new commandment I give unto you, That ye love one another; as I have loved you”)…”3

The name of this day bears the mark of His command. Isn’t it time our lives were marked by it as well? Many churches have a Good Friday service during which they remember our Lord’s crucifixion. Perhaps a Maundy Thursday service should be considered as a time during which Christians in a local church would commit themselves to humble service to one another and to laying-down-life love for one another.

_________
Giovanni Giuliani, Christus wäscht dem heiligen Petrus die Füße (Christ washing the feet of saint Peter). Cropped from a photograph by Wolfgang Sauber. GNU Free Documentation License, Version 1.2 or any later version published by the Free Software Foundation; with no Invariant Sections, no Front-Cover Texts, and no Back-Cover Texts. Creative Commons Attribution-Share Alike 3.0 Unported, 2.5 Generic, 2.0 Generic and 1.0 Generic license.
Ichthus (the ΙΧΘΥΣ) Wheel in Ephesus: public domain via Wikipedia.
The wheel is an overlay of the uppercase letters, ΙΧΘΥΣ. The fish has been a Christian symbol since the early years of the church. The Greek word for fish is an acrostic; each letter is the first letter of one of the five words of the phrase: Jesus Christ, God’s Son, Savior: ͑Ιησοῦς Χριστός Θεοῦ ͑Υιός Σωτήρ.
1D. A. Carson, The Gospel According to John (Wm. B. Eerdmans Publishing Company, Grand Rapids MI: 1991) 458.
2Francis Schaeffer said the love of Christians for one another is The Mark of a Christian, and in the book he wrote by that name he called John 17:21, The Final Apologetic.
3Wikipedia, Maundy Thursday.