Rejoice greatly, O daughter of Zion!
Shout in triumph, O daughter of Jerusalem!
Behold, your king is coming to you;
He is just and endowed with salvation,
Humble, and mounted on a donkey,
Even on a colt, the foal of a donkey.
Zechariah 9:10 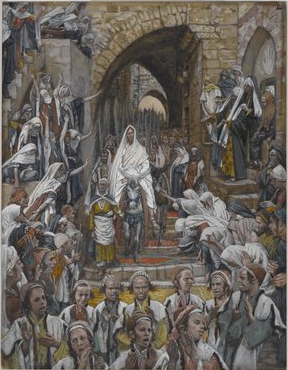 After He had said these things, He was going on ahead, going up to Jerusalem.

When He approached Bethphage and Bethany, near the mount that is called Olivet, He sent two of the disciples, saying, “Go into the village ahead of you; there, as you enter, you will find a colt tied on which no one yet has ever sat; untie it and bring it here. If anyone asks you, ‘Why are you untying it?’ you shall say, ‘The Lord has need of it.’”

So those who were sent went away and found it just as He had told them. As they were untying the colt, its owners said to them, “Why are you untying the colt?” They said, “The Lord has need of it.” They brought it to Jesus, and they threw their coats on the colt and put Jesus on it. As He was going, they were spreading their coats on the road. As soon as He was approaching, near the descent of the Mount of Olives, the whole crowd of the disciples began to praise God joyfully with a loud voice for all the miracles which they had seen, shouting:

“Blessed is the King who comes in the name of the Lord;
Peace in heaven and glory in the highest!”

As Jesus entered Jerusalem the Sunday before He was crucified, all four Gospels record the crowds shouting the words of Psalm 118:26:

This won’t be the only appearance of Psalm 118 this week. Not only does the crowd shout it to Jesus, Jesus will quote it as He confronts the Pharisees, and in all likelihood Psalm 118 will be sung by Jesus the evening before He dies.

The ongoing use this week of the psalm is significant because Psalm 118 is a Passover psalm. It was sung in remembrance and praise to God for delivering His people from their slavery to the Egyptians. It’s one of six psalms, Psalms 113–118, known as the Egyptian Hallel,1 traditionally sung at Passover.

Hallel means “Praise,” and Hallelujah means “Praise the Lord.”2 On Palm Sunday this Passover psalm was sung in praise to the Passover Lamb who came to deliver His people from their slavery to sin.

The shout of Palm Sunday anticipated the joy of Easter morning.