The word angel is not an English word, but a Greek word, ἄγγελος (angelos). It means messenger. Throughout the story of Christ’s birth in the Gospels of Matthew and Luke, you’ll find God sending His angels with His messages to explain to people exactly what He is doing. 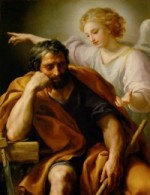 The angel Gabriel is sent to Zacharias (Luke 1:11–20) about the coming birth of John, the forerunner of Messiah; six months later Gabriel is sent from God to Mary (Luke 1:26–38) to tell her that she will be the mother of the Son of God; and then an angel of the Lord appears to Joseph (Matthew 1:18–21)  in a dream after he hears Mary is pregnant and tells him not to be afraid to marry her, explaining her child is conceived of the Holy Spirit, and  “He will save His people from their sins.”

When Jesus is born an angel of the Lord appear to shepherds in the fields (Luke 2:8–14) near Bethlehem, 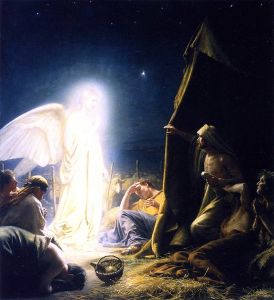 And an angel of the Lord suddenly stood before them, and the glory of the Lord shone around them; and they were terribly frightened. “Do not be afraid; for behold, I bring you good news of great joy which will be for all the people; for today in the city of David there has been born for you a Savior, who is Christ the Lord. This will be a sign for you: you will find a baby wrapped in cloths and lying in a manger.”

Then all at once:

And suddenly there appeared with the angel a multitude of the heavenly host praising God and saying,

“Glory to God in the highest,
And on earth peace among men with whom He is pleased.”

Matthew tells us of the final appearances of angels in the Christmas story. After the Magi leave, an angel of the Lord appears to Joseph (Matthew 2:13) in a dream and warns him to take Jesus and Mary and flee to Egypt and stay there until the angel tells him because Herod is going to search for the young Jesus to kill Him. The angel appears to Joseph (Matthew 2:19) a last time after Herod is dead to tell him to return to Israel.

So when we speak of the birth of the Lord Jesus, the angels are always recalled, and when we sing Christmas songs, in many of them we sing about angels, because at that first Christmas God sent those angels with messages to encourage, to guide, to guard, and He sent them with the message of good news of great joy—for Zacharias, for Mary, for Joseph, for the shepherds, and for all of us—that a Savior was born.