Then a messenger came to David, saying, “The hearts of the men of Israel are with Absalom.”

David said to all his servants who were with him at Jerusalem, “Arise and let us flee, for otherwise none of us will escape from Absalom. Go in haste, or he will overtake us quickly and bring down calamity on us and strike the city with the edge of the sword.”
2 Samuel 15:13–14
–

Tuesday’s Bible reading of 2 Samuel 15–19, recounts another civil war within Israel. Absalom is pitted against his own father, David. There are betrayals, intrigues, and fury in this sad chapter in the history of Israel. Pray and ask God to teach you as you read these chapters.

2 Samuel opens with Now it came about after this. These events happen after a tragic saga of sin. After five years of not seeing his father, David had finally sent for Absalom. But even as Absalom was in a slow burn plotting for two years to kill Amnon, he has been in a slow burn of anger against David. 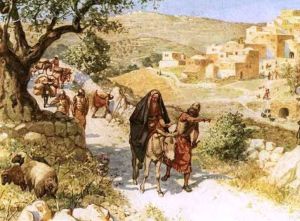 Absalom was handsome and highly praised, and he used his charisma first to steal the hearts of those who came to Jerusalem to seek judgment from the king. He gathers men together and sends spies throughout Israel to tell the people Absalom is king in Hebron. David is warned and forced to flee from Jerusalem.

Not only does David’s own son seek to usurp his throne, but his counselor Ahithophel goes over to Absalom’s side. Absalom enters Jerusalem, but David has his own spies, and with their aid, Hushai the Archite, David’s friend, is able to warn David. War ensues, Absalom is killed, and 20,000 men die in battle.

Even after he returns to Jerusalem, David will have to deal with lingering anger and resentment between his own tribe of Judah and the other men of Israel.

As you read the horrors of these chapters you will find Nathan’s prophecy of 2 Samuel 12 fulfilled. That sword will now never depart from David’s house.

“Now therefore, the sword shall never depart from your house, because you have despised Me and have taken the wife of Uriah the Hittite to be your wife.’ Thus says the Lord, ‘Behold, I will raise up evil against you from your own household; I will even take your wives before your eyes and give them to your companion, and he will lie with your wives in broad daylight. Indeed you did it secretly, but I will do this thing before all Israel, and under the sun.’”
2 Samuel 12:10–12
–

The story of Absalom is staggering. There are obvious lessons about parenting, but much of what could be said is conjecture about how David’s personality and background—not to mention being on the run from Saul—influenced his parenting, and most of what can be said would probably be fairly accurate, but I want to look at Absalom.

One of the ten commandments is:

“Honor your father and your mother, that your days may be prolonged in the land which the Lord your God gives you.”
Exodus 20:12
–

Absalom obviously broke this commandment, and he paid for it with his life. This commandment is reiterated in Leviticus 19:3, and Deuteronomy 5:16. There are also commands about putting to death anyone who strikes or curses his parents. So what recourse did Absalom have? Is there something he could have done other than to burn with anger and hatred?

Absalom could have remembered that vengeance belonged to God (Deuteronomy 32:35). Rather than take his own revenge against Amnon, he should have recognized God as the avenger of evil.

What about his father? He was angry at David for probably several reasons: as his father and as the king, David did not punish Amnon, and then David held back on admitting Absalom to his presence and reconciling with him. In Leviticus 19, further down from the command to reverence your parents are these commands:

He should never have acted against Amnon. From David’s reaction to Nathan’s rebuke, I think Absalom would have known he could bring Amnon’s sin to his father. David was not an unreasonable man or hard-hearted. Even if Absalom had not gone immediately, but later after David did nothing, Absalom could have gone to David, and brought up the lack of justice done to Amnon. He could have sought out a wise way and help to act in respect, yet reprove his father for not administering justice.

Yes, David was at fault for what he did and did not do. Absalom, however, made the choice not to go to his father and lay things at his feet. Instead, he chose anger, resentment, and hate. The result was more sin: betrayal, war with 20,000 dead, and ultimately, the loss of his own life.

The consequences of David and Absalom’s acts serve as severe warnings. We can not only learn from David how not to parent, but we can also learn from Absalom, what not to do when we, or those we love, are grievously wronged.