The stone which the builders rejected
Has become the chief corner stone.
This is from Yahweh;
It is marvelous in our eyes.
Psalm 118:22–23 LSB
–

If you look in the Gospels, you’ll find records of Jesus’ intense confrontations with the religious leaders during Holy Week. Matthew, Mark, and Luke record the heightening tension on Tuesday. The parable of the vine-growers killing the son of the vineyard owner is key in inciting their fury. After He concluded it, Jesus asks them a question. When He quotes Psalm 118:22–23 they realize they have indicted themselves:

Therefore when the owner of the vineyard comes, what will he do to those vine-growers?” They said to Him, “He will bring those wretches to a wretched end, and will rent out the vineyard to other vine-growers who will pay him the proceeds at the proper seasons.” 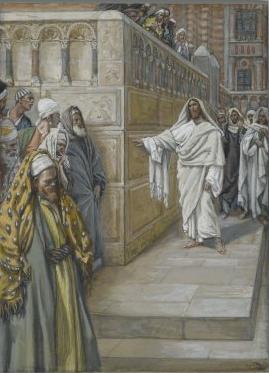 “Jesus said to them, “Did you never read in the Scriptures,

‘THE STONE WHICH THE BUILDERS REJECTED,
THIS BECAME THE CHIEF CORNER stone;
THIS CAME ABOUT FROM THE LORD,
AND IT IS MARVELOUS IN OUR EYES’?

“Therefore I say to you, the kingdom of God will be taken away from you and given to a nation, producing the fruit of it. And he who falls on this stone will be broken to pieces; but on whomever it falls, it will scatter him like dust.”

And when the chief priests and the Pharisees heard His parables, they understood that He was speaking about them. And although they were seeking to seize Him, they feared the crowds, because they were regarding Him to be a prophet.
Matthew 21:40–46 LSB
–

Jesus knew Psalm 118 referred to Himself, and not only that, He told the Pharisees this through His use of this psalm. Leslie M’Caw and J. A. Motyer pointed this out about Psalm 118:22:

“Isaiah (28:16) uses identical terminology about God’s promises to David: it was the error of Hezekiah at that time to seek military security rather than the security of trusting the promises. In standing by His promises, God chooses the stone which the worldly-wise rejected. Cf. Dn. 2:34, 35, 44, 45; Zc. 3:9; 4:7. Stone was obviously in common use as a symbol of Davidic monarchy and a Messianic term.”1

Now think about that for a moment. Jesus knew this. The Pharisees and other religious leaders knew this. He was clearly telling them He was Messiah, and they knew this. Do you wonder that they sought to seize Him?

At the end of His formidable indictment of the Pharisees Jesus again laments over Jerusalem, closing with Psalm 118:26, the very words the multitude had cried out when He had entered the city two days earlier:

“Jerusalem, Jerusalem, who kills the prophets and stones those who are sent to her! How often I wanted to gather your children together, the way a hen gathers her chicks under her wings, and you did not want it. Behold, your house is being left to you desolate! For I say to you, from now on you will not see Me until you say, ‘Blessed is He who comes in the name of the Lord!’”
Matthew 23:38–39 LSB
–